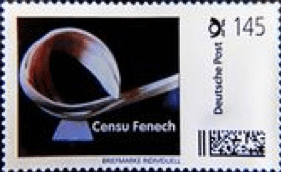 Censu spent his working career in Malta at the local drydocks as dock master. Surprisingly he discovered that he had a talent for sculpture. After attending the local School of Art he obtained a diploma in sculpture with distinction. In 2014 he won the Malta Society of Arts National Competition: the overall prize in the painting and sculpture section.

In 2015 he was featured in the New York publication ‘International Contemporary Artists’. Later he was invited to exhibit his work in several European cities and in New York, Florida and California. He produced a series of ceramic sculptures, working with clay and building structures with wire and a mixture of cement and marble powder.

There is a sense of Calatrava’s architectural dynamic flying concrete structures in Censu’s works. They are architectural constructions that intimate a poetic rhythm. There is a fine sense of music in his volumes whether in stucco, stone or ceramics. His vision is quite lyrical.

In stucco the works are light and dynamic with flowing movement; in stone the works are solid and at times heavy; in ceramics vivid colour dominates the structures.

In 2016 he was featured in a Berlin publication called ‘Awarded Art’. The award was in the form of two personal stamps by the German Post Office. Also in 2016 Censu received the Honorary Diploma of the Berliner Art Prize.