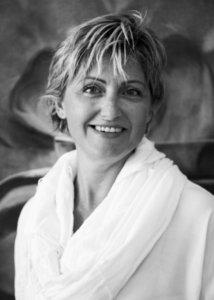 A well-established artist, Anna Galea is best known for her large floral and marine watercolours, although she is also very keen on life figure painting and abstractions.

She has more recently taken to painting large canvases in oils and other mediums in addition to her large expressions in watercolours.

Dividing her time between Malta and Dubai Anna has had numerous exhibitions all over the world, from New York to Europe, from the Middle East to Mauritius, and most recently in Paris at the Carrousel du Louvre and at the Malta Society of Arts in Valletta.

Anna has conducted several art demontrations including a Master’s demonstration to members of the International Watercolour Society in Fabriano, Italy (2016) as well as in Dubai (2018). Anna’s paintings have featured in books of the highly acclaimed “International Artist” publishers of USA. Her work can be found in various private collections of connoisseurs, in palaces and museums, banks and offices.